My original cobras were tested the old-fashioned ways: you measured for center of gravity and center of pressure then “flew” the rocket at the end of a rope around you like a sling to test it’s stability before flight. THEN you launched and hoped you got it all right. Well now we have simulation software that lets you build and test your rocket before you even hit the hobby shop for parts. RockSim is a really nice simulation program and I used it to flesh out my designs.

Once I proofed my new design and had some simulation data to work with I settled on an engine configuration that could handle six D12s, six E9s or six E30s. I could probably jam in six F60s but that might be pushing it’s stability because of the extra engine length. Besides, big fields are harder to find now than when I was twelve years old.

First, fins. Although it worked well for my original Cobras, old-time Balsa wood is out of the question for this size. Some type of enhance composite was required. I had never done epoxy-base composites before so though I’d give it a try. New techniques keep my interest better. I experimented with carbon fiber, kevlar and fiberglass a bit to test some ideas. In the end, fiberglass was the most cost effective method and more than strong enough for this thrust class. Carbon or kevlar would be necessary if I get into the H engine and higher classes. Besides, they cost 4-10 times as much as fiberglass. 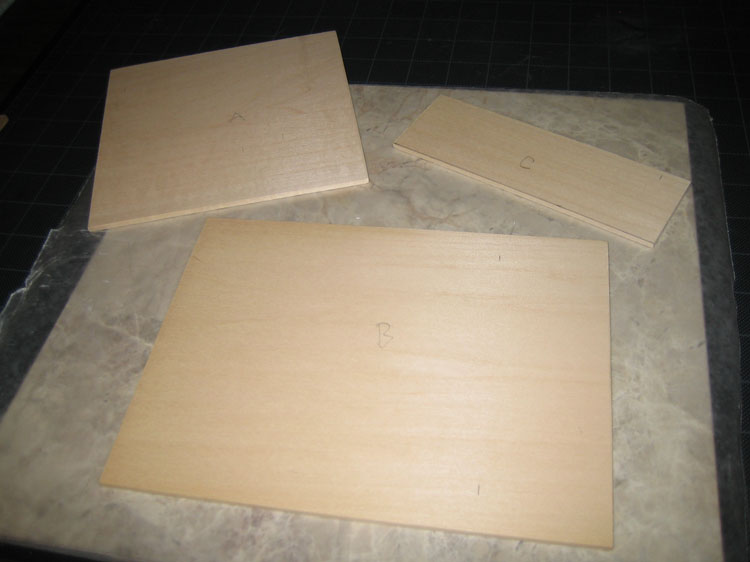 After doing some strength testing for a few weeks I settled on a five-layer plywood & fiberglass composite fin. By laying out the plywood layers with their grain perpendicular to each other I was able to increase the strength of the fin many times before even introducing the fiberglass layers.

I sandwiched a layer of heavy fiberglass cloth in epoxy between the two perpendicular grained, 1/8″ three-ply plywood bases. 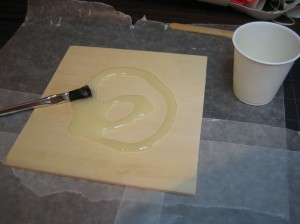 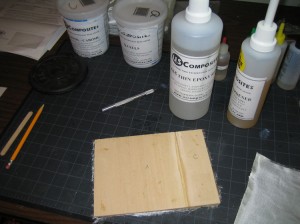 This gave a very strong core for the fins.

Now for the outside. I layers a medium density fiberglass cloth in an epoxy soup with Q-Cells to make the layer softer to finish. Not enough to lose structural density–just enough to make the outside easier to finish sand. I sandwiched all the layers between two marble floor tiles–the smoothest, least likely to bend material I could find–and weighted them for 48 hours to cure fully. 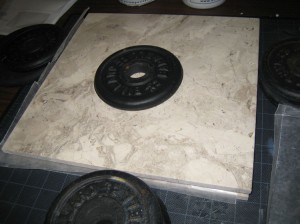 Lost a test set because I didn’t realize that the epoxy lubricated the layers enough for them to slide out of alignment during the night even with weight on them. Learned a lesson–lock everything down tight!

The finished product is a lightweight, incredibly strong fin. But the finish left a bit to be desired.